January
$832
February
$723
March
$745
April
$899
May
$765
June
$756
July
$848
August
$757
September
$776
October
$789
November
$671
December
$959
Currently, November is the cheapest month in which you can book a flight to Cairns. Flying to Cairns in December will prove the most costly. There are multiple factors that influence the price of a flight so comparing airlines, departure airports and times can help keep costs down.

When is the best time to fly to Cairns?

Cairns has a tropical climate which is divided into a ‘wet’ and ‘dry’ season, with the peak tourist season coinciding with the ‘dry’ season and the Australian winter months of June through to August. Not only are domestic tourists heading north to escape the cold weather in the south of Australia, but many European and North American visitors arrive on their long annual vacation.

Lower temperatures and humidity during this period do make sightseeing much more pleasant, however, and there is far less rainfall or chance of cyclones. In addition, there are no ‘stinger’ jellyfish in the water, meaning you can swim on the beaches and go snorkelling on the Great Barrier Reef relatively care free.

September is a great time to visit if you want to take advantage of off season deals while the weather is still at its best, but by October things start to heat up and thunderstorms are common in the lead up to the monsoon rains. From November to May cyclones can be expected and the highest rainfall normally occurs during the Australian summer months of December through to February.

The advantage of visiting during this period is not only great accommodation and flight deals, but also seeing the waterfalls and rivers of the Daintree and Cape Tribulation rainforests in all their glory, as well as fantastic white water rafting on the Tully River. Diving is also excellent on the Great Barrier at this time, with calm winds and excellent visibility.

If you want to avoid the majority of the rains and the crowds, then opt to travel in April/May at the start of the ‘dry’ season when some cheap flight tickets are often found.

When is the best time to book flights to Cairns?

When booking flights to Cairns, try and do so as early as possible to get the best flight deals, particularly if you are traveling during any of the Australian or New Zealand school holiday periods. Keep in mind that the winter months of June through to August are an incredibly popular time to be in the far north of Australia and cheap flights to Cairns and accommodation deals can be difficult to find.

Which day is cheapest to fly to Cairns?

The cheapest flights to Cairns are usually found when departing on a Wednesday. The departure day with the highest cost at present is Sunday.

At the moment, flights at midday are likely to offer the best value for money for your Cairns trip. A flight in the afternoon will more often than not be of higher cost.

How long is the flight to Cairns?

Flights from Auckland to Cairns – 6 hours.

Which airlines operate flights to Cairns?

You can get direct flights to Cairns from Auckland with Philippine Airlines who fly the route four times a week, or opt to connect through Brisbane with Qantas or Virgin Australia who both offer onward flights to Cairns. From Christchurch and Wellington there are a number of different airline combinations to choose from, including Qantas, Air New Zealand and Virgin Australia, all of which connect through either Sydney or Brisbane. Virgin generally offers the cheapest flights to Cairns, but good deals can be found with the other airlines if you book early.

The Cairns Airport is located around 7 kilometres to the northwest of the Cairns CBD in the suburb of Aeroglen. There is a public bus that services the airport, connecting passengers at Sheridan Street with services going both north and south, and tickets can be bought at kiosks within the airport terminal.

A more expensive, but hassle-free, option is the airport shuttle bus that takes you directly to your hotel door. No pre-booking is required and you can buy your tickets at the counters located within the terminal building.

The fastest, but most expensive, route into the city is with a metered taxi which depart from ranks outside the Cairns Airport terminal and will have you in the CBD in around 10 minutes. They offer wheel chair capable vehicles and electronic payment facilities, and you can either pre-book or just turn up. 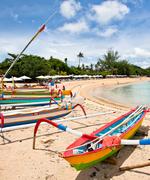 Prices found by our users for local departures to Cairns