When is the best time to fly to Lome?

Whilst there are several times of the year to choose from, is seen as the time to fly to Lome, however, it is possible to get good deals throughout the year. If weather is an important factor for you when considering when to fly to Lome, the warmest period tends to be February, with the wettest being June.

When is the best to fly to Lome?

For those who like it hot, the best time to visit Lome is from November to February, the period of lowest rainfall, and with temperatures up to around 32 C. Having an equatorial climate, the region is hot and damp. If you prefer cooler weather visit in July to September – flights to Lome should also be cheaper then as peak season is April to October. There is also a relatively dry period in August. If weather is no object, the Festival Africarythmes is held at the French institute in Lome each June (the wettest month of the year). It features Togolese artists and musicians and stages workshops as well as concerts. Upwards of 10,000 people attend each year.

Once known as ‘The pearl of West Africa’, Lome is the capital of Togo. A port city, it has an equatorial climate and white beaches fringed with coconut palms. It is the perfect starting point from which to explore the beautiful hills and forests of Togo. A former French colony, the main spoken language is French, and there are some picturesque colonial buildings in Lome, notably the Governor’s Palace and the Cathedral of the Sacred Heart. Lome is noted for its friendly welcome and it has a thriving market culture – the Marche des Feticheurs, or Voodoo Market, in the Quartier Akodessewa displays animist fetishes, like dried snakes or dogs’ heads. For a more conventional shopping experience, the Grande Marche (‘big market’) covers a whole city block and sells food, artefacts and clothes as well as hosting local musicians. Rue des Artisans, near to Grande Marche has jewellery, brass and wood carvings for which you can haggle with traders from Mali, Nigeria and Senegal. At the Village Artisanal on the Avenue de la Nouvelle Marche, local artisans make baskets, chairs and tables, carve statues and weave cloth, all at fixed prices.

For eating out, Cote Jardin in the Rue d’Assoli has an extensive menu and a gorgeous garden with tropical plants, subdued lighting and wooden carvings, perfect for a romantic evening out. A more up market choice is La Belle Epoque in Hotel Belle-Vue, Kodjoviakope. With cool white decor inside and a leafy courtyard outside, the menu is French inspired. The ‘Cote Paillotte’ menu is their budget alternative, with less elaborate meals. For a night out on the town, La Rezo at 21 Ave de la Nouvelle Marche is a cool nightclub that shows football matches on giant screens and also hosts karaoke and jazz nights.

There are some easy and enjoyable trips on public transport from Lome to more rural beauty spots. From Gare de Cotonou in the Rue Holland, bush taxis and minibuses leave for Lake Togo, which takes about 45 minutes and for Aného, which takes about an hour.

In Lome, taxis are everywhere. Decide on fares before the ride begins as cabs have no meters. The journey from the airport (LFW) into town takes about 15 minutes. Taxis and smaller ‘motos’ are the most common way to travel in the capital. 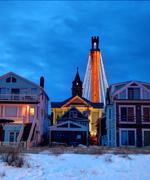 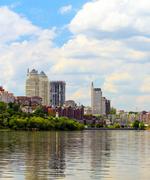