When is the best time to fly to Frankfurt?

Cheap flights to Frankfurt can be hard to find between May and October due to many business conventions, events, festivals and general high tourism. May usually sees the Waldchestag festival, known as Forest Day, which is a three-day folk festival. A combination of live music, food and drink as well as funfair rides makes it a fantastic event for families, tourists and locals. There is also the MainFest in August, which is a huge four-day festival. It attracts thousands of locals and tourists who enjoy fireworks, wine, rides, games, tombolas and much more. Then you have the Luminale Festival which occurs every two years and sees the city transform into a vibrant, lit up place. If you’re hoping to visit any of the festivals, make sure you secure your flight tickets well in advance as flights to Frankfurt will be expensive. It’s also a wise idea to arrange your accommodation early too.

If you don’t mind stormy weather, then aim to secure your flight tickets between November to February. This is the winter period. As well as being able to find the cheapest flights to Frankfurt, you’ll also find darker days, rain, storms and colder weather.

When is the best time to book flights to Frankfurt?

You’ll want to make sure you’ve secured your flight tickets at least two months in advance of your trip to have a chance of finding the cheapest flights to Frankfurt. It’s also best aiming for either winter or summer for cheap flight tickets. Surprisingly, spring and autumn are generally more expensive than the summer due to the number of conferences and events that take place. If you are flexible, then you can find return flights to Frankfurt for as little as £20 a person. Sit on either side of the plane for views of the city as you approach. However, avoid sitting beside a wing as these can obscure your view.

Which day is cheapest to fly to Frankfurt?

At the moment, Tuesday is the most economical day to take a flight to Frankfurt. Sunday is likely to be the most costly.

To get the best value, try booking a flight in the afternoon when visiting Frankfurt. Generally the prices will increase for flights at midday as these tend to have higher demand.

How long is the flight to Frankfurt?

Which airlines operate flights to Frankfurt?

There are a few different airlines that provide cheap flights to Frankfurt, with the main ones being Lufthansa, airberlin, British Airways and occasionally Ryanair. Which airline you choose will mainly come down to either preference or price. Ryanair, for example, will usually offer the cheapest flights to Frankfurt, however you will have to sacrifice slightly on the comfort of the journey. However, for an average flight time of around an hour and a half, this isn’t too much of an issue. British Airways are slightly more expensive, but do offer complimentary food and drinks onboard throughout the flight, so it might be an option to consider. Ultimately, you should decide on what dates suit you best and then compare a couple of airlines to see who will give you the best value for money.

Frankfurt International Airport is one of the busiest in Europe, and the busiest in Germany. Because of this, trying to find a way into the centre is relatively easy. On level 1 of Terminal , you can find the S-Bahn railway station, which can take you into the city for around 5 euros. You can purchase your ticket from level 0 of Terminal 1, and you’ll be able to find information regarding the train times and the city. If you land in Terminal 2, you’ll find a free shuttle to get to Terminal 1. Failing that you can opt for a bus. There are several different lines that go all over Germany, so once your flights to Frankfurt have landed it’s worth checking the information to decide which bus you’ll need. Generally, you’ll be aiming for bus number 61 which goes into Frankfurt-Südbahnhof. Lastly, you can decide to jump into a taxi. They are more expensive than the other options, but you won’t have to wait around. They’re a lot more direct as they can drop you at the door of your hotel or accommodation. Make sure to agree on the price of the journey before you get in though to avoid being ripped off. 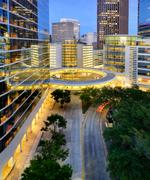 Prices found by our users for local departures to Frankfurt