Which day is cheapest to fly to Algarve?

At the moment, Monday is the most economical day to take a flight to Algarve. Tuesday is likely to be the most costly.

To get the best value, try booking a flight at midday when visiting Algarve. Generally the prices will increase for flights in the afternoon as these tend to have higher demand.

The beaches of the Algarve are legendary: Their soft, sandy stretches are met by sparkling waves and punctuated by red, rocky outcrops made for climbing, exploring and rock pooling. Add the Algarve’s glorious Mediterranean climate, fantastic cuisine and friendly, family-oriented people, and it’s little wonder why so many flock to this region of Portugal.

The central area of the Algarve is considered best for families and those who’d like to play a round of golf. Popular resorts include Vilamoura, Albufeira and Portimao. In the east, spots like Tavira and Olhao are prime destinations for couples, while the west is well suited for solo travel. There are some fantastic towns to explore in this corner of Portugal such as Sagres, Luz, Alvor and Lagos. When you reach historic Cape St. Vincent you’re at the most southwestern point in Europe.

The Algarve’s climate is Mediterranean. Temperatures reach 30 C (86 F) or higher in July and August, and the weather typically stays mild between October and January, though most of the rain also falls during these months.

When to fly to Algarve

The Algarve is popular year round with spikes in visitors during the European school holidays. July and August, mid-to-late October, Easter and early June are among the busiest times.

November and January through February are low-season times when flight prices and hotel rates are more affordable. This is also the rainiest and coolest time of year, though.

There are buses connecting the towns of the Algarve but for maximum independence, renting a car is your best bet. Faro Airport is the gateway to the area and is located just 4 km (2.5 miles) from the capital city of Faro. 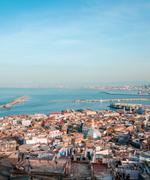 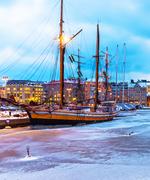