If you’re planning a holiday – and let’s face it, who doesn’t need one? – Australia is a great choice of destination.

Here you’ll find bustling modern cities bursting at the seams with attractions and places to eat, shop and stay. There are small rural towns that have changed little over the centuries; what better way to get an authentic glimpse into Aussie history?

Australia also boasts majestic mountain ranges, gorges deep enough to make your jaw drop, stunning beaches, adventure parks, rivers just made for lazy cruises – you name it. Whenever you’re going, these activities are must-dos that epitomise the best of the lucky country. Tick these 20 things to do in Australia off your list and your well and truly covered.

Melbourne has a well-deserved cosmopolitan reputation, with street art, shopping and historic architecture that’s among Australia’s best. Walking is a great way to see the city, whether you do it on your own or with a guide. Coach tours are an easy way to sight-see, or take a cruise for a different look at the city.

Victoria’s capital is a foodie paradise, and Melbourne has a huge array of tempting restaurants and cafes to suit any taste.

Our last breakfast in Melbourne was less than memorable but boy, did we soak up the charming laneways and the freezing temps that make Melbourne so, Melbourne. #takemeback #melbourne #centreplace #melbournelaneways #wanderlust #nostalgia #insta365 #365story

Australia is known for its beaches, and whether you like to laze in the sun or splash around in the surf, there’s a beach perfect for you. Surfer’s Paradise is a great spot if you’re with the family. In Sydney, Manly and Palm Beach are popular options, or check out Perth’s golden-sand offerings on the other side of the country. If you’re feeling active, try learning to surf from the experts at Bondi, perhaps Sydney’s best-known beach.

Spontaneous lunch dates that evolve into spontaneous beach dates are the best! The water was divine!! #aussieaussieaussie A photo posted by A M Y D A V I S (@mrsdavisxo) on Jan 25, 2015 at 12:06am PST

Sydney isn’t just about lattes, the Opera House and designer shops. It’s also the gateway to the world-renowned Blue Mountains, a mere two hours away by car.

Escape the city for mountainous hiking trails winding around the Three Sisters, see Australian wildlife in its natural habitat and ride the world’s steepest train.

If you’re an adrenalin junkie – or if you’re not – you’ll find plenty of activities here that will get your heart racing. Brave the dizzying heights of the Sydney Harbour Bridge on an unforgettable climb, race down huge sand dunes on a boogie-style board near Perth in the Pinnacles Desert or plunge hundreds of feet down the Giant Drop at the Gold Coast’s Dreamworld theme park. Go on, we dare you.

Take a minute to look back and see how far you’ve come. #bridgeclimb #ilovesydney #seeaustralia A photo posted by BridgeClimb Sydney (@bridgeclimb) on Jan 19, 2015 at 10:06pm PST

The Murray is one of the world’s longest rivers, with a basin covering a third of Australia, sprawling across Queensland, New South Wales, Victoria and South Australia.

Get some friends together and hire a houseboat for a few days – there’s no better way to experience life on the river. Whether you start in South Australia or NSW, your days on the river will be long and relaxing, and the nights even more so.

Houseboats are spacious, comfortable and easy to drive. There are plenty of places to stop to eat or regain your land legs, and the bird life is varied. Watch the world go by as you chug along the mighty Murray.

The Great Ocean Road, in Victoria, is arguably one of the world’s best scenic drives. Take a day to explore the 243km road that hugs the coastline, lending itself to panoramic ocean and cliff views and winds through lush rainforest. Stop for a swim or hike, or to visit one of the many attractions along the way. Words don’t do this driving route justice.

Water and wildlife are abundant in Australia. Combine the two on a wildlife cruise, which is a relaxing way to see some of the country’s many unique animals. Try a whale-watching cruise from Sydney, or see the Hunter Valley from the water with a Port Stephens day trip that includes dolphin watching, sandboarding and Australian wildlife.

8. See the Penguins of Phillip Island

Phillip Island lies off Australia’s southeastern coast and is best known for its beaches and penguins. Tours to see these charming birds are a must for any visitor, and you can even opt for a skybox experience for an up-close, elevated view of the penguins at night.

Day tours to Phillip Island also give visitors the chance to see koalas and kangaroos.

No building is more recognisably Australian than the Sydney Opera House. Anyone can get a photo of the outside, but you can go behind the scenes with a guided walking or backstage tour. On one of these tours you’ll get a peek into the building’s history and have the chance to stand in the orchestra pit and explore the dressing rooms of the theater’s biggest stars. Don’t want a tour? It’s still worth taking in a performance – opera or otherwise – in the stunning building.

It’s the final countdown to #FODI! See you over the weekend. Photo by Rod Gotfried. A photo posted by sydneyoperahouse (@sydneyoperahouse) on Aug 28, 2014 at 10:28pm PDT

People have been enthralled by the 2300km Great Barrier Reef long before Captain Cook ran aground on the reef way back in 1770. It’s synonymous with Australia and is the world’s largest coral reef system.

A day here is a wonderful way to glimpse the magical underwater world. The reef is home to a dizzying array of rare, endangered and unique animals and plants. Snorkel, see the aquatic life from the comfort of a glass-bottomed boat or get the big picture with a scenic helicopter flight.

However you see the reef, it’ll be an unforgettable experience.

Australia may be considered a red, barren place, but there are snowy mountains that become a snow-lover’s paradise in winter. Take a break from the city on a ski tour from Melbourne or Sydney on Mt Buller or Thredbo. If you’re not into skiing, you’ll still have a ball snowboarding, making snow angels or just having a snowball fight with friends or family.

This is a side of Australia many people don’t get to see.

Not a bad view at all…. Take on the MyThredbo Challenge and it could be yours for 5 epic days thanks to our friends at @lastfrontierheli A photo posted by Thredbo Resort (@thredboresort) on Aug 4, 2014 at 12:56am PDT

12. Catch a Sunrise (or Sunset) over Uluru

While you can no longer climb Uluru, the sunrises and sunsets here are still an incredible sight. The sacred rock reflect the most spectacular colours; take a guided camel ride to see the landscape at its most beautiful. If you’re here at night, a barbecue dinner under the stars in the middle of the Outback is a once-in-a-lifetime experience.

Australia has more than 8,200 islands within its maritime borders. So you can’t visit this country without seeing at least a couple of them. Explore some of the tropical islands in the Great Barrier Reef on a day trip from Cairns, visit isolated Tasmania to see wildlife and sample local delicacies, swim in fresh water lakes on Stradbroke Island, which is easily accessible from Brisbane, for example.

We are loving the photography by Kara Rosenlund @kararosenlund from her visit to Straddie. When’s your next #StraddieIs. trip? A photo posted by Straddie Is. (@straddieis) on Oct 16, 2014 at 5:29pm PDT

Australia is full of surprises and its food is one of them. Sample mouth-watering cuisine and wine on a Barossa Valley tour from Adelaide, or take in a Swan Valley food and wine trail, starting in Perth. For something more traditional, go rural with a Bush Tucker indigenous food tour from Uluru, in the heart of the Outback.

What a delicious looking lunch at #Sandalford! Love the pic @justaddalittlecolour

15. Take in Some Culture

Aboriginal culture is a huge part of Australia, and no holiday here is complete without learning something about this history. Take an Aboriginal cultural tour from Alice Springs to sample traditional food and try your hand at indigenous art. Visit the UNESCO-listed Aboriginal Cultural Daintree Rainforest on a tour from Cairns or Port Douglas, or delve deeper with a two-day Aboriginal culture and Kakadu National Park tour from Darwin.

@visitcentralaust is a hub for uniquely Australian indigenous art. Here, Daphne Marks is working on her latest creation at @ikuntjiartists, 230km west of #AliceSprings. Take a dot painting workshop at Uluru, visit communities like Haasts Bluff, and marvel in the many galleries of Alice Springs. There’s no better souvenir than a special piece inspired by the Outback. Thanks for sharing via #NTaustralia #SeeAustralia A photo posted by Northern Territory (@ausoutbacknt) on Jan 19, 2015 at 5:25am PST

There’s something incredibly romantic about seeing a country by train. Tasmania’s West Coast Wilderness Railway Tour winds along a rarely visited coastline. Meander through wine country on a Puffing Billy Steam Train, travel in style between Adelaide and Darwin on the Ghan, or opt for a range of other scenic rail journeys.

Who wants the hassle of driving when there’s sightseeing to be done?

Fraser Island, just off the coast near Hervey Bay in Queensland, is the world’s largest sand island. Its 120km of pristine beaches draw visitors by the thousands. Once you’ve had enough of the beach, a 4WD is a great way to get around. There are plenty available for hire. Fresh water lakes, rainforests and fantastic dive and snorkeling sites are also highlights of Fraser Island.

18. Get to Know the Wildlife

There’s no better place for animal lovers to get up close and personal with their favourite cute furry creature.

Visit the Lone Pine Koala Sanctuary with a Brisbane River cruise. In the far north, check out predatory crocodiles in their natural habitat from the safety of a viewing platform. Hand-feed kangaroos at Featherdale Wildlife Park in Sydney, or get to see a range of creatures on an extended tour such as the ones offered around Kangaroo Island.

Look at our cheeky joeys! Three of them all having a piggy back on one very patient mum 🙂 #lonepinekoala

Spend a day sailing and snorkeling around the beautiful Whitsunday Islands. Tall ship tours give you plenty of time to relax while your crew navigate calm waters and colourful reefs. If you’re feeling active, you could even try your hand at sailing with them. Snorkeling and a seemingly endless array of delicious food are added bonuses.

Australia’s largest forest covers a huge area in northern Queensland. The Daintree rainforest is a natural wonderland home to 30 per cent of Australia’s reptiles, marsupials and frogs, 65 per cent of its bat and butterfly species, and 20 percent of its native birds, including the prehistoric Cassowary (beware, these birds have quite the temper).

The forest boasts a huge range of amazing nature experiences, such crocodile boat tours, mangrove adventure tours and hikes of varying lengths. No wonder it’s such a popular destination for locals, tourists and nature lovers. 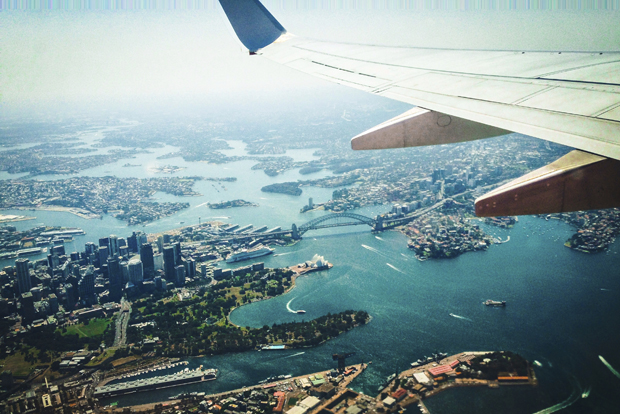 Around Australia by train, coach or plane?

For a country almost the size of Europe, it’s really important that you put some serious thought into how you’re...
Jason Brick 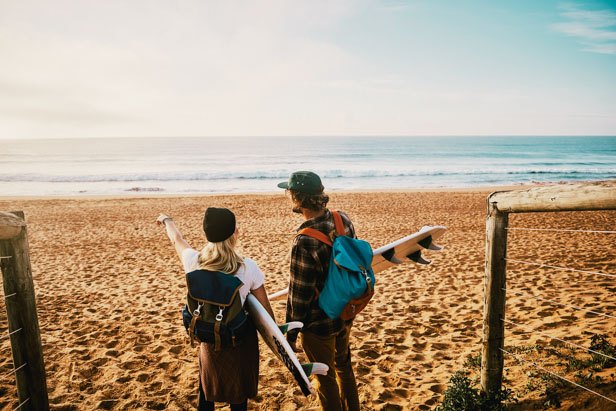 How to travel Australia’s Sunshine Coast on a budget

In this humble writer’s opinion, the Sunshine Coast, just north of Brisbane, is one of the most picturesque areas in...
Martin Fleming